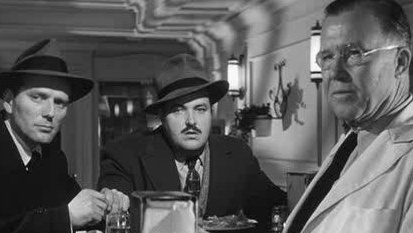 In The Killers, if not for a catalytic stint as a messenger boy, presumably, searching the same streets for the same address as two hit men, Ernest Hemingway treats reoccurring character Nick Adams with incidental indifference. He achieves this by writing from a particularly sterile third person multiple character point of view.

This cavalier treatment of the subject of his series of short stories alerts the familiar reader that this story is going to be different. Indeed it is. The famed economical prose is rationed. The tightly rhythmic dialogue is cropped. The edges are sharper. The angles, steeper. Hemingway’s alter ego, Nick Adams, has come of age.  We know this when we read the fifth paragraph:

Outside it was getting dark. The streetlight came on outside the window. The two men at the counter read the menu. From the other end of the counter Nick Adams watched them. He had been talking to George when they came in.

The men are dressed expensively, but their physiques strain against the fabric of their almost identical ensemble of overcoat, derby, gloves and muffler, too ill fitting to be considered fashionable.

Behind the counter is George–the proprietor of the place. Nick Adams–probably about eighteen or nineteen–sits at the opposite side of the counter. Nick either works at the diner or he is a regular customer as he and George seem to know each other well.

One of the men orders pork roast and mashed potatoes. George politely informs him that the pork roast isn’t ready yet.

The other man, who the pork roast guy calls Al, decides on chicken croquettes. George tells him the croquettes aren’t ready either. The air, stilled when the strangers walked in, is sucked out of the room.

What is this? Some kind of conspiracy? The men’s irritation is palatable. George’s blood pressure rises with the clenching of their jaws and the hardness of their eyes. Then they begin a not so friendly game of let’s push our weight around this joint.

At first George gets plummeted. Then Nick.

The tension continues to escalate as Al and his companion lob one insult after another at George and Nick, while simultaneously feigning insult over the dominated men’s slightest, most innocuous utterances. Mercifully the escalation breaks when Max–Al finally refers to him as such–orders Nick around the other side of the counter with George. Nick puts up a bit of obligatory  resistance before he obeys. No guns are drawn.

“Whose out in the kitchen?” Al asks. George answers with a racial slur, referring to the cook, Sam.

Al orders Nick to go into the kitchen with Sam. Then he follows, leaving Max and George at the counter.

“What’s this all about?” George asks. Max then proceeds to explain. They are there to kill a big Swede, an ex boxer named Ole Anderson.

George admits that he knows Anderson and then asks,

“He never had a chance to do anything to us. He never even seen us.”

“What are you going to kill him for, then?”

“We’re killing him for a friend. Just to oblige a friend, bright boy,” Max tells George.

Al ties up Nick and Sam and gags them while George handles a smattering of customers that come and go.

“Sam stepped out, will be back in about a half an hour,” he tells one guy who wants supper. He makes another guy a ham and egg sandwich to go, and tells, yet, another cranky, hungry customer that Sam got sick and left.

“Why the hell don’t you get another cook?” the man asked. “Aren’t you running a lunch counter?” He left.

Meanwhile the strangers know “the Swede” takes his supper in the diner at around six o’clock most evenings. Max watches the clock. Al watches Nick and Sam. He has pulled out a sawed off shotgun concealed beneath his overcoat. It rests across his lap. He sets on a stool, bored but resolute.

“What you going to do with us afterward?” George asks Max. “That’ll depend,” Max said. “That’s one of those things you never know at the time.”

At ten after seven, they decide the Swede isn’t going to show.

“Sure. We’re through with it.”

“Oh, what the hell,” said Max. “We got to keep amused, haven’t we?” “You talk too much, all the same,” Al said. He came out from the kitchen. The cut-off barrels of the shotgun made a slight bulge under the waist of his too tight-fitting overcoat. He straightened his coat with his gloved hands.

“That’s the truth,” Max said. “You ought to play the races, bright boy.”

And without further ado, they walk out of the diner and into the night.

George rushes into the kitchen and unties Nick and Sam. Nick is obviously relieved, but he tries to play it off.

They decide that Nick will go tell Anderson though Sam warns him not to get involved. Nick, too, walks out into the night, making his way along the dimly lit streets to the boarding house where Anderson resides.

The manager of the house answers the door and tells Nick that Anderson is in his room and hasn’t left all day. He follows her up the stairs and she knocks on the Swede’s door.

“It’s somebody to see you, Mr. Anderson,” the woman said.

Nick opened the door and went into the room. Ole Anderson was lying on the bed with all his clothes on. He had been a heavyweight prizefighter and he was too long for the bed. He lay with his head on two pillows. He did not look at Nick.

Nick proceeds to tell Anderson about being held by the two men at gun point and about the reason he was held that way. To his alarm, Anderson seems unfazed.

“I don’t want to know what they were like,” Ole Anderson said. He looked at the wall. “Thanks for coming to tell me about it.”

But the young man persists. He asks to go to the police. “No,” Anderson says.

“Couldn’t you get out of town?”
“No,” Ole Anderson said. “I’m through with all that running around.”  “Couldn’t you fix it up some way?”
“No. I got in wrong.” He talked in the same flat voice. “There ain’t anything to do. After a while I’ll make up my mind to go out.”
“I better go back and see George,” Nick said.
“So long,” said Ole Anderson. He did not look toward Nick. “Thanks for coming around.”

Back at the diner George is wiping down the counter when Nick comes in. He asks if Nick talked to Anderson.

Then the two converse about what the Swede could have done to warrant a visit from two hit men. They mutually decide he must have double crossed somebody in Chicago.

Nick tells George he plans to leave the town himself. George tells him that would probably be the best thing to do.

The Killers is a coming of age story a quarter shy of its destination. Only by the dogma of the law is Nick Adams considered an adult. Still, he is following the trajectory of manhood and witnessing the precise, yet, brutal effect of an especially sharp knife without the armor of youth.

Nevertheless, Nick is spared from what experience informs George. When Al forces him into the kitchen, Hemingway removes Adams from a third of the story, leaving George and Max to hash out the implications of their encounter. In this way, the author demonstrates the demarcation line of maturity, i.e., what you don’t know won’t hurt you and that’s a good thing since other–older--people will control your life.

Sure, Nick knows things are serious–he’s bound and gagged and a hood is guarding him with a sawed off shotgun–but he is blissfully unaware that the odds of him walking out of the diner alive are within the width of a cat’s whisker, or two. Max and Al expect Ole Anderson to show up at around six o’clock for supper and they expect to kill him when he does–and anyone else who has the misfortune of being in the diner at the time. George and the cook Sam know this.

When Anderson doesn’t show, Al wants to dispose of the witnesses. It’s just good business, but Max isn’t so keen on the idea.

Max has carefully observed George; he has recognized the older man’s attempt to play tough by referring to Sam with a racial slur and called him out on it–but he also begrudgingly admires the man’s humility and dignity. He decides to let the men slide. “We’re done with it,” he tells Al. This conveys that the hit men are leaving town without killing Anderson and, more importantly, that the force of fate can spin on the head of a pin.

After the hit men leave, George unties Nick and suggests that he go warn the Swede. Nick agrees. Sam warns him not to get involved, signifying that he is cognizant of George’s exploitation of Nick’s youthful indiscretion .

Nick makes it to the boarding house only to find Ole Anderson, an ex boxer and pillar of masculinity, pitifully apathetic to the encroachment of his demise. Likewise he barely acknowledges Nick’s risk to save him.

With The Killers, Hemingway continues to explore his pet themes of masculinity, naivete, compassion, bravery, betrayal and emasculation through character, Nick Adams. By this time, the familiar reader has observed Nick since he was a boy and has grown quiet fond of him.

The Killers, is decidedly colder and even less sentimental than Hemingway’s other Nick Adams offerings such as Indian Camp and The Battler. Accordingly he prepares the young man for his estimation of true manhood and for war.