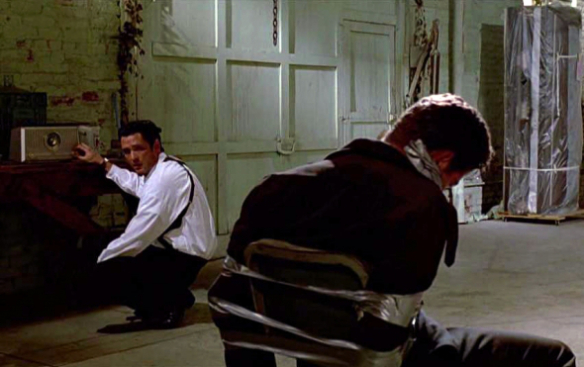 We all have our favorite cinematic moments where the music swells and our feelings soar with joy, sorrow, terror or humor. When (and where) the film director uses pre-recorded  music to inspire emotion it’s called a needle drop. Case in point, the scene depicted in the above image from Reservoir Dogs, a scene so iconic that I need not describe the circumstances–it is grafted into our cinematic bone marrow. But I will recall the reaction the scene evoked: unease, humor, shock, terror and repulsion.

Yes, chances are, we were all on the same roller-coaster when Mr. Blonde did his weird little cha cha to the fantastic early 70s pop/rock ditty from Stealers Wheel, Stuck In The Middle With You. And if you’re like me, the experience has altered the way you hear the song even now.

The following are some of my favorite needle drops. I’ve limited them to thriller complementary genres and though not all are necessarily the best of the best representations, (you won’t find Derek and the Dominos Layla from Goodfellas here, it’s just too obvious) most will spark a memory and an emotion or two. Hope so anyway.

An understated and underrated British gangster movie with a lean, not so mean and very hot Daniel Craig, before he blew up into a superstar. The soundtrack is on the reserved side as well–in a good way–with music from The Cult, The Source, Duran Duran and the like. The selections capture a time and a place and a certain hip coldness that makes us feel a tad bit removed but still worried. Joe Cocker’s mournful, haunting cover of Don’t Let Me Be Misunderstood during closing credits resonates longing and regret. It’s a shot through the heart.

A very polarizing film–you either love it or hate it. There’s no denying the soundtrack though. As music director, Trent Reznor of Nine Inch Nails sutures a music montage that is close to perfect. Patti Smith, Daune Eddy, L7 and Patsy Cline are some of the artists that narrate a rainbow nightmare love story. The scene where the Cowboy Junkies’ Sweet Jane plays softly while Juliette Lewis gets carried away in sentiment and philosophy may bring a tear to your eye–or not.

This is one of my favorite movies. It’s bleak and nihilistic. Chloe Webb and Gary Oldman  wolf down scenery like, ahem, wolves and there’s so much whining, drinking and drugging I had a panic attack the first time I saw it. And the soundtrack? It’s awesome though it contains no Sex Pistols songs. Worth having just for Gary Oldman’s absurd and totally punk cover of My Way. Drop the needle moment: Sid has just made bail and he’s walking through a Escape from New York cityscape where he encounters some kids with a boom box. He jams with them to–drum roll— KC & the Sunshine Band’s Get Down Tonight. Charming. And I’m not kidding.

There are so many great pop infused moments here that it’s really hard to narrow them down for the sake of one relatively tight paragraph. So:

(a.) The the opening credits scroll to Western singing group The Sons of the Pioneers gently crooning Tumbling Tumbleweeds in a salute to The Dude’s laid-back id as well as the film’s groovy So-Cal locale.

(b.) Dude gets down to Creedence’s Lookin’ Out My Backdoor when his mellow gets harshed by a roach drop and he wrecks his Torino–again.

(c.) The Dude’s White Russian gets roofied and he slips into an eye-popping  bowling pins/scissors/phallic symbol surrealistic sequence to The First Editions Just Dropped In (to see what condition my condition was in.) Um…it’s critical.

Black Flag, The Circle Jerks, Iggy Pop and Emilio Estevez sporting an 80s flattop and a dangling cross earring; what’s not to like? The part where a bummed out Otto (Estevez) sings Black Flag’s TV Party after being orally rejected brings about a smile or a frown, depending on one’s perspective.