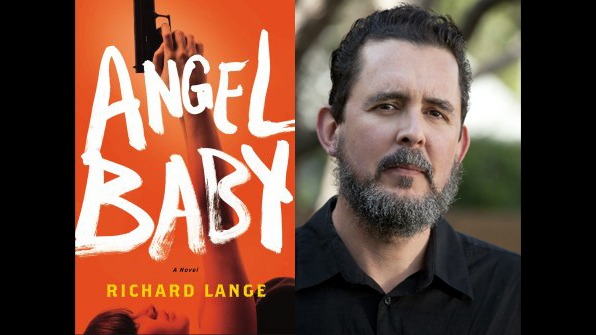 There’s a lot of running in Richard Lange’s brash thriller, Angel Baby. A vengeful husband chases his liberated wife. A dead end drunk flees from his past. A stone cold killer tries to outrun his worst fear. And a crooked cop ducks out on his gambling debts.

Then there’s Luz. She’s running the hardest. That’s because she’s a mother who left her little girl behind. Now she’s got her head on straight; now she’s determined to backtrack and make up for lost time despite the miles of greed, perversion and murder–not to mention her own guilt–that lies between the two of them.

Rolando, a.k.a. El Principe (The Prince), is a narco who traffics for the Tijuana cartel. A fiendish control freak, he keeps his beautiful wife, Luz, under his thumb by keeping her sweet, i.e., under the influence. Or so he thinks. Luz executes a daring escape from the mansion that is her prison, absconding with bundles of The Prince’s cash, his custom silver-plated .45 and, more ominously, gobs of his pride. On her way out, she has no choice but to shoot and kill two of his most trusted compatriots. She will do what ever it takes to make it across the border to Los Angeles where her four year-old daughter, Isabel, awaits.

To get there she hires Malone, a driver with the DT’s, a death wish and a simmering conscience. In Luz, Malone sees glimpses of redemption but a ruthless hit man with his own seething vendetta is hot on their heels. Even worse a corrupt, perverted boarder patrol agent has gotten wind of the pretty “chica” with a backpack full of money trying to cross.

And then there’s The Prince. He doesn’t want Luz dead just yet; he has visions of torture running through his head. He will do anything to make her suffer.

Angel Baby is Richard Lange’s second novel and it is an unashamedly old fashioned page turner. The characters are believably fleshed out, the dialogue is bracingly genuine and while the plot stretches the bounds of credibility at times–especially toward the end–it has enough grit and realism to keep aficionados on the line. Coming in at around three hundred pages it’s a great rainy day read. But make no mistake, this is dark, under belly stuff. There’s so much evil and desperation, so much running, that some thriller enthusiasts–especially those who favor the more “sophisticated” psychological variety–may find this outing too exhausting. Those who enjoy the hardcore classic noir of Jim Thompson or the contemporary noir of Nik Pizzolatto should be sufficiently conditioned for the journey.

Lange’s most recent offering, 2017’s The Smack, is available on line but I’d rather not wait. I’m running down to Books A Million now.