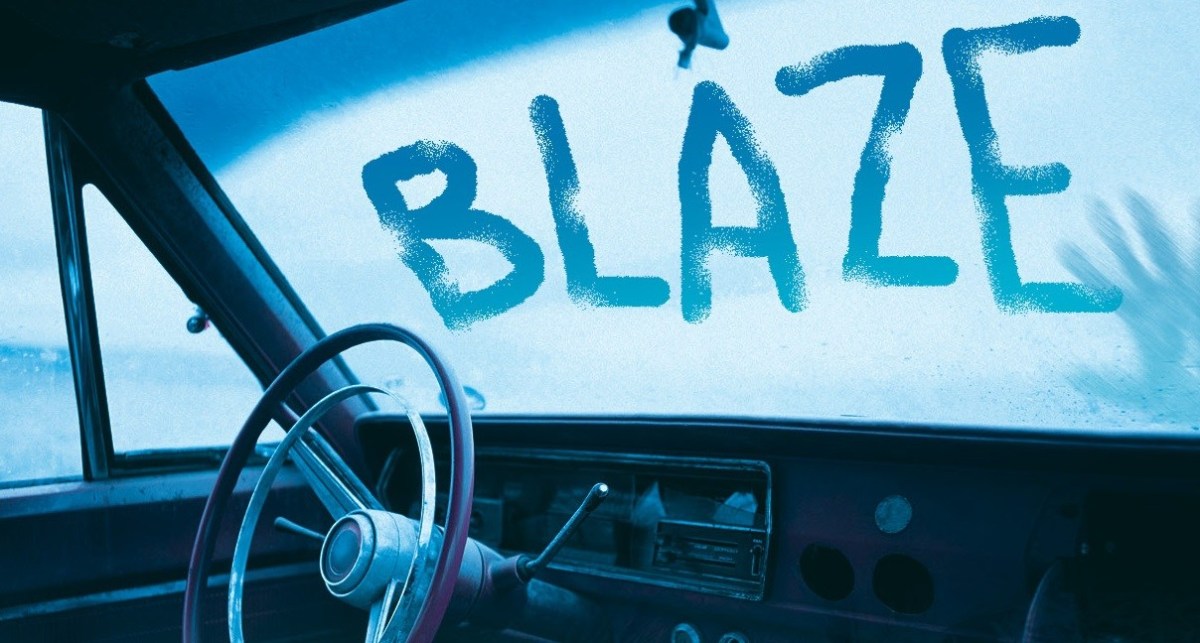 Okay, a heads up is in order. I’m not a big Stephen King fan. Oh, there’s some of his stuff I like–Cujo, Misery, Christine and, yes, The Green Mile and Different Seasons–but over all? No.

Now before your eyes roll back in your head, I’m no pretend book snob. Hardly. I’ve read a lot more Johnathan Kellerman than John Steinbeck. So there’s that.

Anyway, my deal with King is a matter of tenor. For instance he must have a thing for string beans with undershot chins because one has shown up in just about every novel of his I’ve read. His characters are too classically established “with a twist of caricature” for me. Just sayin’.

Be that as it may, I greatly admire his prolificacy and over the top imagination. King is wicked smart and creative and I would never stoop so low to deny his obvious talent. I’m just more of a James Herbert fan (sans his predilection for graphic sex scenes. Ick.)

Now that I have cleared all of that up, on to Blaze.

King calls Blaze a trunk novel (an early work, sometimes incomplete, that the author stores away and  then “rediscovers” after achieving success.) He published Blaze under the pseudonym Richard Bachman because he says he wrote it during the time he was most productive as the alias. In fact King wrote the novel in 1973 before he started using the pseudonym and then rewrote in around 2006, publishing it in 2007.

As far as I–the occasional Stephen King reader–am concerned, that’s neither here nor there. I picked up Blaze at Walgreen’s, read the back cover, thumbed through it and was intrigued. I read it and liked it. Then onto the bookshelf it went. The other day I was going through my paperbacks and ran onto it. Read it again. Liked it even better.

It made me cry.

“In the schoolyard he was everyone’s bear. He sometimes rode as many as three first-graders on his shoulders at once…swaying, swaying, usually grinning, his dented face turned up to the sky…”

With Blaze, King articulates some of his familiar archetypes in a relatively unfamiliar context–tragedy mired in hope. Here George is the string bean with the undershot chin and the protagonist, Clayton “Blaze” Blasdell is the lumbering, misunderstood behemoth, i.e., the Lenny Small character in Steinbeck’s Of Mice and Men. Consequently George is based on the George character of said Steinbeck novel.

The twist is that George and Blaze are small time criminals and–this is more like a twister a.k.a. tornado–George is dead. He exists as a hologram of the mind, inside Blaze’s dented head.

Tragically, it didn’t have to be that way for Blaze. Yes he was injured, ergo the dented head, (forehead to be exact) but this was no accident. His father threw him down the stairs as punishment for eating Apple Jack’s in the living room. Then when the boy wouldn’t bounce right back up, the evil bastard slammed him down on his head again and, yet, again for good measure.

The attempted homicide left him an imbecile. And if that isn’t bad enough, before being pulled into the auger of fate, Blaze had a trifecta of potential. He was big. And strong. And at least smart, if not intellectually gifted. Now he’s just big and strong.

Due to the abuse and his mental challenges Blaze is made a ward of the state where he comes of age and, from time to time, meets some good people that are able to look beyond his hulking size, disfigured brow and disabilities, seeing him for who he is: a gentle stray who longs to belong to someone kind. A few of these folks even try to offer a helping hand but are thwarted in one Dickensian way or another. Predictably, realistically, though, most of the people Blaze encounters concoct cruel ways to mistreat him for their own twisted amusement or devise criminal ways to use his almost super human strength and size to their advantage.

This is where George comes in. George is a scrawny, hyper active psychopath with no appetite for “unnecessary” violence and no heft to employ it should he need to. He thinks of Blaze as an especially sharp arrow in his quiver of skulduggery; the “just in case” muscle. Plus he kind of likes the lug in spite of his misanthropic tendencies.

George’s specialty is the short con, but he’s bitter about the money. He thinks he deserves better. Even though it’s out of his wheel house, he aspires to kidnap the baby of a wealthy couple so that he and Blaze can take up residence on easy street. To this end, he takes Blaze under his malignant wing schooling him on the details of his scheme as well the basics of personal hygiene, table manners and grammar.

George is boss. Blaze obeys, for the most part, unquestioningly. When he does balk, George sets him straight.

But George has an especially vile, smart-alecky mouth that gets him into trouble and eventually gets him killed in a dice game, leaving Blaze on his own and without the means to care for himself–again. That’s when Blaze’s fractured psyche splinters and he begins to hear and see George’s doppelganger. And George’s doppelganger is substantially more malevolent than the “real” George.

This becomes especially problematic when a desperate, cold and hungry Blaze carries out the kidnapping of baby Joey at the doppelganger’s behest. While Blaze is basically kind and has a soft spot for children, babies are a handful–they cry all the time and pretty much require around the clock attention–and “George” who was always high strung and short tempered, isn’t as patient as he used to be.

Okay. I know. I know. You know where this is going. Only the worst of the worst would harm a child, doppelganger or no doppelganger. Very well. Just keep this in mind: we’re talkin’ Stephen King here. All bets are off.

And then there’s that Of Mice and Men thing that I alluded to earlier in the post. Remember Blaze represents the Lenny character. And we all remember what happened to him…And why.