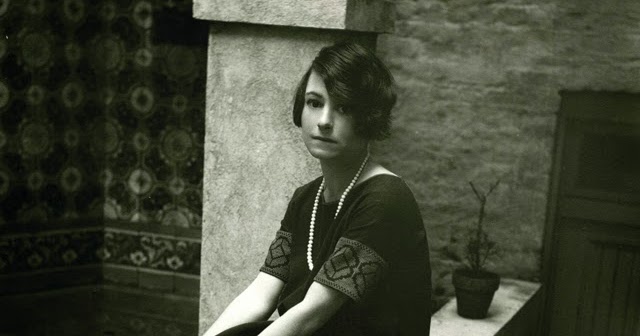 A Mrs. Martin moved into the flat across the hall. She was a great blonde woman of forty, a promise in looks of what Mrs. Morse was to be. They made acquaintance, quickly became inseparable. Mrs. Morse spent her days in the opposite apartment. They drank together, to brace themselves after the drinks of the nights before.

In the company of her new friend, Hazel is known only as Mrs. Morse, though there is no mention of Herbie. It is assumed that he is always away on business–the same with Mrs. Martin’s husband.

Mrs. Martin throws poker parties with her friend and admirer Joe. Joe has several friends–the boys, he and Mrs. Martin calls them–who attend. There is, of course, lots of drinking and uproarious laughter at the poker parties. Hazel–ahem, Mrs. Morse–is instantly popular with the boys, she allows herself to wallow in the levity of her old charm, and the pall of failed domesticity lifts. With the help of Scotch she becomes an expert reveler. She tells some jokes now rather than just laughing at them. One of the boys, a successful business owner who travels, is bedazzled. His name is Ed.

He was married. He showed Mrs. Morse the then current photographs of Junior and Sister, and she praised them abundantly and sincerely. Soon it was accepted by the others that Ed was her particular friend.

Still, she doesn’t give up entirely on Herbie although he is hardly ever home. On the rare occasion that he shows up, Hazel doesn’t cross the hall to her friends. But things never go the way she hopes they might; Herbie is not only immune to her charm, he is determined to eviscerate it. Self preservation numbs her to him. When she comes home from a poker party early one day to find him packing she is neither surprised or mad or even more than a little hurt. She pours them a good stiff drink.

He took his highball. “Well,” he said, and he gave a sudden, uncertain laugh. “Here’s mud in your eye.” “Mud in your eye,” she said. They drank.

Herbie takes the elevator and the six o’clock train to Detroit. Hazel traipses back across the hall. She is older now–still pretty but heavier (then there’s the drinking)–and no longer a candidate for stout women’s fashion modeling. Herbie has left her the contents of their bank account but that won’t last forever.

Ed swoops right in. He walks with her across the hall to her apartment that very evening after poker. Hazel is lost to her. Now she will only be Mrs. Morse. She invites him in.

“Got a little kiss for me?” he asked. He wrapped her in his big arms and kissed her violently. She was entirely passive. He held her away and looked at her. “Little tight, honey?’ he asked anxiously. “Not going to be sick, are you?”

Mrs. Morse wants for nothing with Ed. He moves her out of her old flat to an apartment close to the train station, far from Mrs. Martin and the boys. He hires a maid for her and they frequent a tavern called Jimmy’s where she makes friends of women of her own ilk and girth. They all are kept women.

The aim of each was to have one man, permanently, to pay all her bills, in return for which she would have immediately given up other admirers and probably would have become exceedingly fond of him; for the affections of all of them were, by now, unexacting, tranquil, and easily arranged.

Ed had a good year, increased her allowance and gave her a sealskin coat. But she had to be careful of her moods with him. He insisted upon gayety. He would not listen to admissions of aches or weariness.

Their arrangement lasts three years. Then, suddenly, he has to move to Florida and can no longer travel to New York so freely. Ed gives her a hefty check and some shares in his stocks. He is sad. There are even tears in his eyes as he says goodbye. On a rare occasion he slips into town for a visit.

She was always pleased to have him come and never sorry to see him go.

One of Ed’s friends at Jimmy’s, a guy named Charlie, is enamored with her. He has an irritating habit of maneuvering in conspicuous ways so he can touch her.

Charlie picks up where Ed has left off, but Mrs. Morse isn’t very fond of him. She describes him to friends as “not so bad.” He will do until another comes along. And another one does.