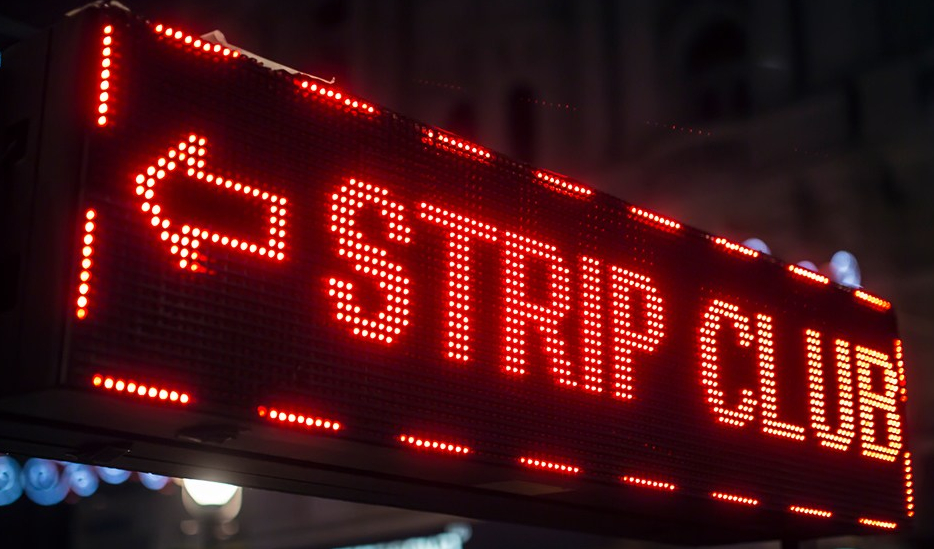 Recap of Part I: After working a series of odd jobs, ranging from construction to waiting tables, as newcomers to Nashville in the mid 80s, my husband takes a job as strip club DJ, despite my insistence that he not. In order to keep the peace in our relationship, he takes me to the club with him where I observe the goings-on from the DJ booth. One of the frequent customers is a notorious physician accused in local newspapers of sexual abuse and writing prescriptions in exchange for sex.

Dark, temperate and unaired, the atmosphere messes with your circadian rhythm. The only way you can tell that it’s daylight outside–aside from your own watch, there are no clocks in strip clubs– is by the customers inside. The nooners. That’s what we called them even though the club didn’t open up till 4 p.m.

I can still remember some…The slick in a business suit, some state representative that popped in from the capital just about everyday…The EMT who worked nights and spent his days buying lap dances…There was Beebo (I have no idea why they called him that) the limo driver who worked the same hours as the EMT. They sat at the bar together when they weren’t doing the lap dance thing…Then there was the clammy guy with greasy hair who the girls said smelled like he lived in his car. He was tolerated even though he habitually violated the club’s dress code. He bought sit outs and private dances.

They were the hardcore, the backbone of the strip club business that the girls counted on for loans and rides from time to time. They weren’t loud and they didn’t cause trouble. If there was trouble, it happened later, during the second shift. The last thing these guys wanted was to get kicked out.

My husband DJ’d the 4 p.m. to 10 p.m. shift. At least he did at first. The doctor usually came in during this time block, but not always; he didn’t qualify as a nooner. For the most part he didn’t really have a pattern except that he came in the the side door with Rodger. Rodger was the club owner’s right hand man.

And you never knew when Rodger was going to show up.

None of the girls used their real names. They all had stage names. For some reason I remember the name Ashley being popular. That always struck me as strange. I never thought “Ashley” was stripperish. There were a couple of Mercedes, an okay name, but it sounds more like a stage name than Ashley–to me anyway.

Then there was a Ginger. Star. Desiree. Gypsy…To name a few.

My husband got along with all of them. They told him what to play. They all had their special songs. Some were into Metal. Some liked R&B. A few of the girls got into Hank Jr. and Eddie Raven but Nancy only allowed about three Country songs an hour.

That was fine by us.

My husband was kind of like Nancy’s Sargent. She used him to keep the girls in line. It was his responsibility to make sure that they were ready to come on stage when it was their turn–when their song was played.

He also had to scan the club and make sure no shenanigans were going on. If there were shenanigans, my husband called in the bouncers to take care of it. (I saw a lot of stuff, but I kept my mouth shut. Not my job.)

The customers followed the cardinal rule: No touching the girls. The guys were absolutely prohibited from it, not even when they put money into the G-strings. No flesh on flesh touching.

It was different for the girls. They could touch the guys, e.g., hold their hands, touch their shoulders, kiss them on the cheek, but that was all.

Nancy was very strict about touching. It was important to her that the club was “clean”. Rodger wasn’t as strict.

The doctor could touch.

Sometimes I sat at the end of the bar by the DJ booth. That’s where the girls sat when they weren’t working. I got to know some of them. Some I liked. Most I didn’t.

One was particularly strange. She was very quiet. Older. I would say mid to late thirties. Not pretty, but not bad looking either. When she talked, she spoke intelligently with no trace of accent. And when she did her “floor show” (that’s when they danced on the stage) she always touched her nose, closing off one of her nostrils. We all knew what that meant. Cocaine. The club was flooded with it.

One day she and I talked. She told me that she was just about to finish up nursing school. “That’s great,” I said. ” Then you can stop working here.” She looked at me like I had just said that I hated puppies. “Why would I do that?” she asked incredulously. “I love it here. It’s my hobby.”

When she got out of school she went to work for the doctor. But she still worked the club. Part time.

Have you ever seen those guys that are always in a perpetual sweat? Like Richard Nixon?

Nixon had that thin layer of sweat between his nostrils and his upper lip. People said that’s why he lost the debate to Kennedy. Too sweaty.

The doctor was like that, but he had a mustache. A thick black one. His hair was black too. Shoe polish black, an obvious dye job.

He wore pleated slacks, calf skin loafers and light weight zip up jackets– Members Only–over golf shirts. The girls said he carried a gun in an ankle holster. He was smarmy looking, though he thought himself very handsome. The girls flocked around him when he made his grand entrance with Rodger, but they laughed and made faces behind his back.

Rodger didn’t even like him, but he kept him around. I’m sure that had something to do with the prescription bottle Rodger kept in his pocket. Rodger was obese. He said the doctor was helping him loose weight.

One night while I was setting at the bar, the doctor approached me. I had never talked to him before. Didn’t want to. He said something obscene to me–having to do with his medical practice. My husband saw the exchange. He jumped down from the DJ booth. “What’d he say to you?” he yelled.

My husband shoved the doctor against the bar and then pressed against his chest, bending his back awkwardly down. The doctor tried to push him off, but my husband is unusually, deceptively strong. Rodger hollered for my husband to stop. My husband wouldn’t. Rodger called for the bouncers. They wrestled him away from the doctor.

I was relieved–and happy. I just knew my husband was going to get fired.

“You better not ever talk to her again,” my husband screamed at the doctor. I’ve never seen his face so red, his eyes so wicked.

Rick was the second shift DJ. He worked 10 p.m. to 3 a.m. His fiance was Princess, one of the dancers. Rick was all right. He could work the light board like Jimi Hendrix could play the guitar. I’m not kidding. The guy was an artist.

Rick had a very wealthy father who had recently passed away. What his father did, I don’t know. All I know is Rick had a lot of money coming to him once the estate was settled. Three million dollars. When the money kicked in, he and Princess were out of there. They had plans to move to Montana.

Well, the money did kick in–sooner rather than later. Rick and Princess didn’t give the club any notice. I didn’t blame them. Nancy told my husband he’d have to work double shifts until she found another DJ. We were both pissed. Especially me. That meant my husband had to work eleven hour shifts Monday thru Saturday. The club closed Sundays.

My husband wore cowboy boots to the club. I never liked them but that’s what he wanted to wear. We’re from Texas, that’s not unusual there.

He stood on his feet most of the time in the DJ booth and would often complain that his feet hurt, especially his big toe–which big toe, I can’t remember. I told him to ditch the boots. He wouldn’t.

One morning when he pulled off his boots after work, his big toe was black. The next day he called Nancy and told her he needed to take a couple of days off. She said no.

Now my husband is probably the best employee Nancy ever had. He was always on time, didn’t put the make on the girls–consequently they liked him–never drank on the job, kept his wits about him and had/has a really good announcer’s voice. He went to college for it, after all.

He told her he was taking off a couple of days. And he did. When he went back to work two days later, she fired him. He was glad. We took off a month before we both got new jobs. I remember we slept for about a week straight.

A man ran after two men he said stole his wallet, firing his gun at them multiple times just outside Green Hills mall Monday night in a Macy’s shopping trip gone bad.

____________age 68, said he was in the process of buying his girlfriend a swimsuit at a register in Macy’s when two men ran by him, grabbing his wallet off the sales counter as they passed.

ran after the two individuals, who he said got into a white SUV or minivan-type vehicle.

“That’s when I started shooting – when he opened the door,” said. “I was in fear for my life.”

He admitted to firing several shots with the Smith & Wesson revolver he was carrying in his pants pocket. Police confirmed had a valid handgun carry permit.

said he is a weight loss doctor based in Nashville, but a Tennessee Department of Health license search revealed that license is currently revoked. His history as a medical professional is marred by disciplinary actions, hefty fines and court hearings from 1997 to 2011, according to the health department.

His license was revoked in 2008, and he was assessed $41,000 in civil penalties on several charges including unprofessional, dishonorable or unethical conduct, fraud or deceit and false advertising.

Aaron said the actions of the suspects and remain under police investigation.