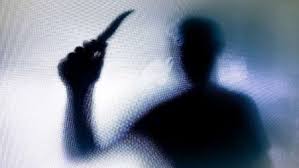 In fact Yablans was so impressed–and inspired–that on a flight back to Los Angeles from the London Film Festival, he mapped out the idea for a horror movie that suddenly dawned on him. He set up a meeting with Carpenter at the Hamburger Hamlet on the Sunset Strip and pitched it to him.

“I said, I have this idea to do a movie about a bunch of babysitters being terrified on Halloween. But I want it to be theater of the mind. Think Psycho and The Exorcist. We won’t show any blood and gore. I said it was like a radio show. You set the audience up and let them scream. John and I, we connected immediately. He said, ‘I know exactly what you want to do.’ ”

Collaborating with then girlfriend and fellow screenwriter Debra Hill, Carpenter wrote the script in ten days tentatively naming it The Babysitter Murders. Yablans suggested the title Halloween instead and Carpenter, who had demanded full creative control (writing, directing, and scoring the musical soundtrack) in exchange for accepting a paltry salary of $10,000 and ten percent of the profits, agreed.

Filmed in twenty-one days on a budget of $300,000, Halloween premiered in Kansas City, Missouri on October 25, 1978. The premier garnered respectable numbers for an independent film. The next night, though, was a harbinger of the success to come.

“The numbers were double. The third night, they quadrupled. This means everybody who saw this picture felt compelled to go home and tell somebody else to go see it.” Irwin Yablans

Halloween went on to gross 70 million dollars, making it the most profitable independent film in cinematic history, until The Blair Witch Project bested it some twenty years later. The movie established John Carpenter as viable directorial star by showcasing his own distinctive film signatures, e.g., minimalism, natural lighting, claustrophobic framing, innovative music score, indestructible killer with tropes borrowed from other horror sub genres, molding a template for the slasher film prototype. In 2006 John Carpenter’s Halloween was selected for preservation in the United States National Film Registry by the Library of Congress.

Precursors of the Halloween prototype:

The Scarlett Claw (1944) – director, Roy William Neill, starring Basil Rathbone, Nigel Bruce – A Sherlock Holmes movie, that employs the use of a distinctive weapon (a gardening tool) to dispatch victims. The camera focuses on the disguised killer’s arm as he raises “the claw” menacingly in the air and then repeatedly strikes. Fine use of special effects, camera work and music.