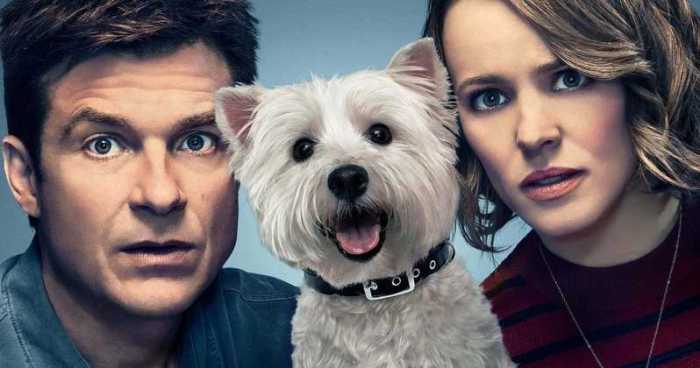 Annie (Rachel McAdams) and Max (Jason Bateman) are a cute couple. And, like every cute couple, they have a thing. Competition…that’s pretty much it. They met at trivia night.

Not only are they competitive with one another, (it’s friendly, but fierce) they like to gang up on others. (They’re a good team.)

Ever so often they get together with another cute couple, Kevin and Michelle (their thing is that they have been together, literally, forever, i.e., high school) and Ryan, their physically attractive, goofball buddy, who–to the annoyance of the gang–always brings a long-legged, air-headed date for a night of pool, charades and, or board games.

To that mix add Brooks, (Kyle Chandler) Max’s suave and shiesty older brother, and Gary, (Jesse Plemons) the couple’s creepy, next door neighbor who happens to be a cop and a widower. (To be fair, he does have a really cute dog.)

Whereas Gary desperately (and awkwardly) wants to be invited to Max and Annie’s game nights, Brooks is taller, darker and handsomer than Max…and more athletic. So there you have your psychological conflict.

Plus, there’s Max’s sperm problem–he’s not producing enough, or they’re scraggly, or…you get the idea; the cute couple wants to have a cute baby, but they can’t because Max is stressed out about the competition thing with Annie and–mainly–Brooks.

One game night, Ryan (the goofball buddy) brings an older more accomplished date, Sarah (she’s also Irish) to the soiree at Brook’s house where he has sprung for an elaborate, interactive role playing game in which the winner takes home the car of Max’s teenaged dreams–a classic Corvette Stingray.

Max is inspired and pissed at the same time.

When two thugs break in and kidnap Brooks while he’s explaining the rules of the game, everybody is impressed with the excellent acting and physical stunts of the role players (they body slam Brooks into a glass coffee table) and are eager to join in. There’s just one problem: unbeknownst to them, the role players aren’t role players at all. They’re real kidnappers. And Brooks is a real gun smuggler who is reaping what he has sowed.

So that’s pretty much the gist of the movie…they start out believing it’s a game and then in the middle–Max gets shot, Gary’s dog gets saturated in blood and Brooks gets the crap beat out of him–it becomes a lot more real, but no less funny.

In this case we have the directing duo of John Francis Daley and Jonathan Goldstein, both of whom fostered their careers primarily in television. Accordingly, Game Night benefits from a crisp script, disciplined pace and a solid supporting cast. But more than anything else, it’s the chemistry between Jason Bateman and Rachel McAdams–skilled pros, adept at scoring and setting each other up–that drives the film.