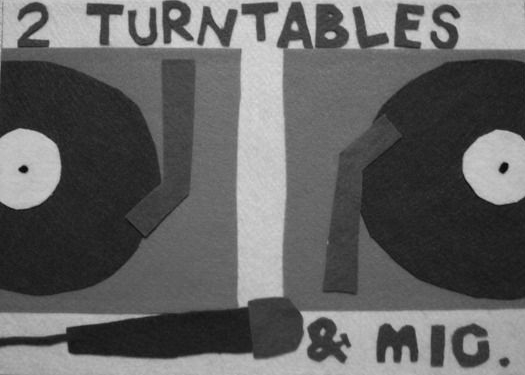 Those of you familiar with my blog probably know that I am a DJ. I have DJ’d professionally–on FM radio and as a mobile–for twenty-five years, most of that time spent as a mobile.

I no longer actively DJ. Instead, my husband and I manage a small business in which we employ a collective of younger, hipper, physically stronger DJs. (Sorry, honey.)

DJing came to me fortuitously and somewhat unexpectedly; my husband was in radio at the time and, as a part time air personality, was tasked with doing private parties for people calling the station looking for a DJ. I went with him to his gigs and before long I was doing my own.

Mobile DJing required a very different skill set from what I had learned in college radio and from what my husband was doing at 104.5 The Fox, although some of the cross over skills we accrued were definitely assets. In any event, it wasn’t my intention to DJ professionally in any capacity, let alone to do it for a quarter of a century, but that’s what happened.

It was tough going at first. I had no experience as a dance DJ and I hadn’t spent much time in night clubs (aside from the year I spent with my husband in a strip club where he was DJing. I’ve written about that little episode. Terrible.)  The few clubs I did go to, back in the day, were rock clubs where live bands played.

Consequently I have many harrowing, cringe inducing stories from early in my career that perhaps I will share later. I can look back on these memories and laugh, but at the time, I assure you, it wasn’t funny at all. In fact I would have thrown in the towel, probably after my very first gig, if I could have–but I didn’t have that option.

Well, I take that back, I could have, but that would mean me going back to working low paying–and if not that–back-breaking jobs, as my qualifications were few and my connections fewer still. So I sucked it up.

Anyway, this particular incident happened when I was probably a good six or seven years into my career, when I was over the big hump of not knowing what the hell I was doing, much more comfortable in my acquired skills, but I still had a lot to learn about the nuances of the job.

Back in those days we did a lot of smaller gigs–backyard barbecues, family and class reunions, school dances, that kind of thing. And we did a lot of out of town gigs in the smaller cities skirting Nashville and the surrounding counties.

Now I remember precisely what town I was in, but I’m not going to divulge that bit of info. I’m sure it would be perfectly fine if I did, but I’m very cautious when it comes to this kind of stuff, so mum’s the word.

The gig was a bachelorette party and it was at this little, rinky-dink “country club”–a cinder-block country club (yeah, I’m with ya’, it’s the first and last time I’ve seen one of those too) way on the outskirts of the town. I arrived on location about forty-five minutes beforehand to setup.

In those days I did my own setup and take down, so I was dreading this one. It was upstairs, in a room over the country club.

Well, I go up the stairs to check out the room and the door was locked and the lights were off. Immediately I got an extra dose of  anxiety because I was already about thirty minutes later than I wanted to be, considering I had to haul all my gear up the stairs.

When I drove up, I saw there were some cars in the parking lot. So I went downstairs to the main portion of the building. As I approached the door, I noticed that it was a metal and that it had a diamond shaped window cut into it. The window was covered in foil. Not a good sign.

But I had a job to do and I was running out of time. So I turned the knob and walked in.

Oh boy. Did I get an eye full. It was a scene right out of the movie Walking Tall. The original Joe Don Baker, Walking Tall; not the Bo Svenson one or–gag!–the Duane Johnson, aka, The Rock, Walking Tall.

The room was full of gambling paraphernalia. There was a roulette table. There were slot machines and there was a lady, I rather thin-faced woman with a stern expression, sitting at a table dealing cards. To my recollection, she was the only woman in the room. I looked at her and she looked at me. And that was all she wrote.

I turned and calmly walked out the door. Now keep in mind that I took in all of this in less than a minute.

I went back to my van, got in and locked the doors. I almost threw the thing in reverse and got the hell out of dodge. But I didn’t. My husband and I had a little girl, a mortgage and bills to pay.

In about five minutes a pickup pulled into the lot and parked beside me. An kindly looking gentleman got out. He had the keys to the upstairs room. He offered to help me carry up my gear, but I politely refused.

And since I’ve been writing about DJing, I thought I would give you a sample of my wares. Now this is nothing fancy. No tricks. No gimmicks. And it’s not necessarily dance music either. There’s some 80s and some 90s–mostly rock.

It’s about an hour of continuous music, so fair warning.

Enjoy, if you’re so inclined.

Leave a Reply to allthingsthriller